It is an epitome of love, a sheer poetry of passion, an artistic brilliance representing the ardour of love and the agony of lovers departed by the death and then commingled by the same. It is THE TAJ MAHAL. 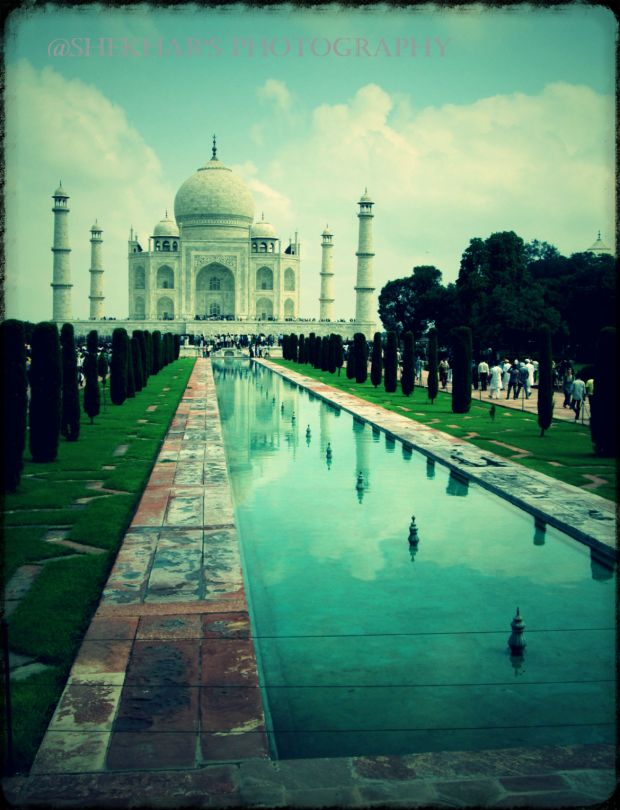 Died in the fort of Asirgarh, the beloved wife of the fifth Mughal emperor- Mumtaj mahal was buried here years later.

Being a very non-romantic person, Taj was not on my “to-be-visited” list but being a student of history and a lover of beautiful monuments specially those representing the extravagant lifestyle of the Mughals; I had to visit the Taj. The architecture of the Taj is not only beautiful but also very unique and advance as compared to other structures of its era. On the entry from huge gate just before the Taj mahal, Taj looks as if it is floating in the sky and I thought I was the only one to experience that but going through many books regarding history, I got to know that it was the style adopted by its makers to make it look like that- floating in the sky as if it is a building that belongs neither to the earth nor to the sky. Turning around to see the interior part of the gate, I was glad to behold the incised work on the inner side of the red gate of sand stone and realized that it is something which cannot be ignored while entering the complex. 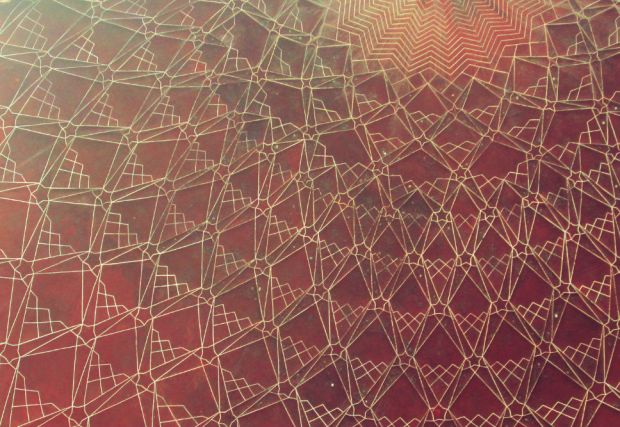 The fountain with bubbles of water in a straight symmetry in the center with the pathways both the sides leading to the tomb is imperial in its own way. Beautiful flowers and lush resembling green velvet carpet with red and grey stones on the pathway makes the whole experience very rich.

But the magnificence of this most beautiful building of India is experienced when you reach the main complex outside the mausoleum of Mumtaj Mahal-people coming from the huge main gate known as darwaza-i-rauza of sandstone with white marble, dome of Taj touching the sky, minarets on four sides of the main building, mosque on one side of the tomb and the building made for the pilgrims to rest-who would come to visit the mausoleum-on the other side….everything looks stupendous and spectacular. 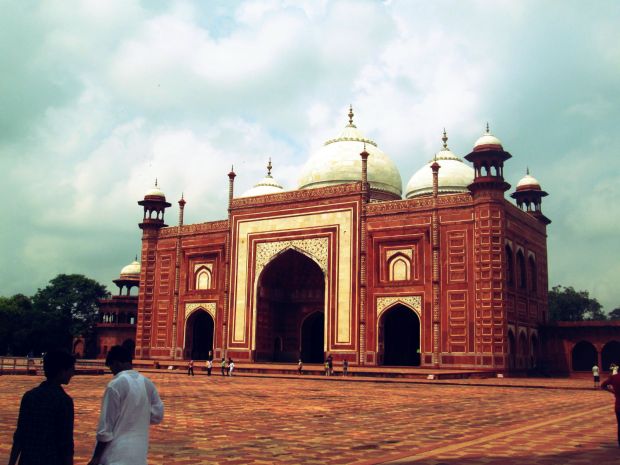 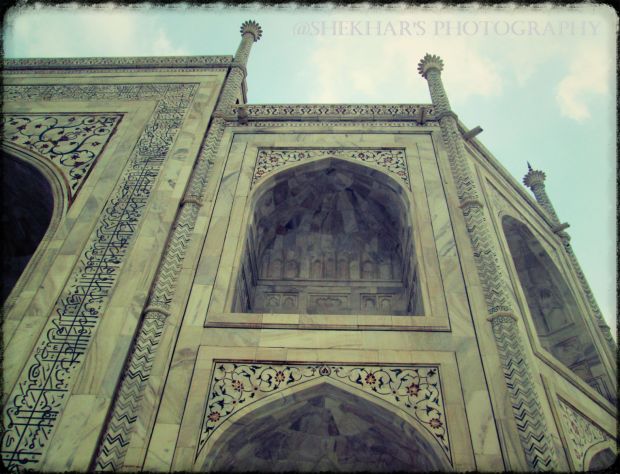 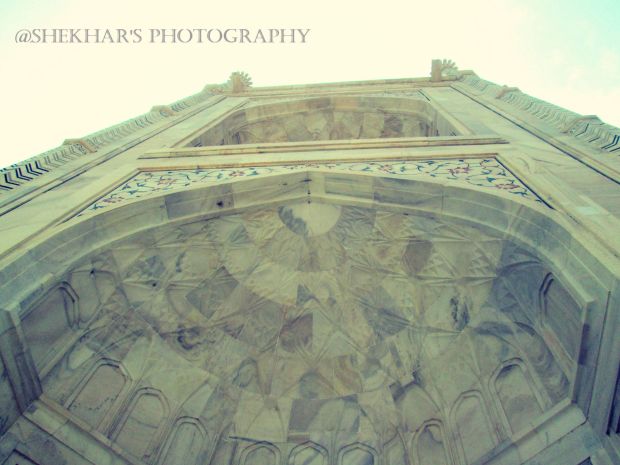 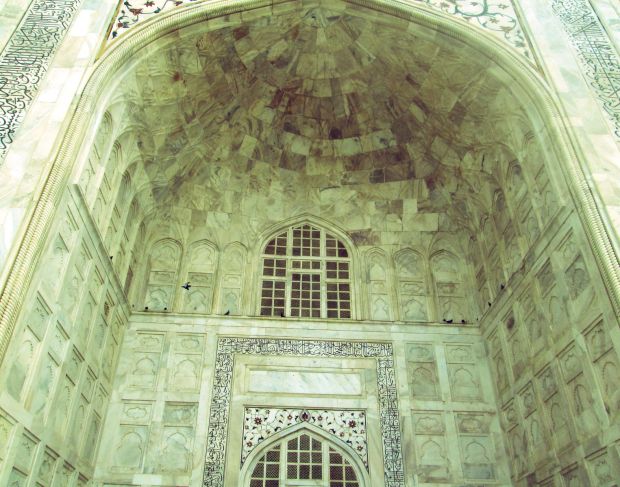 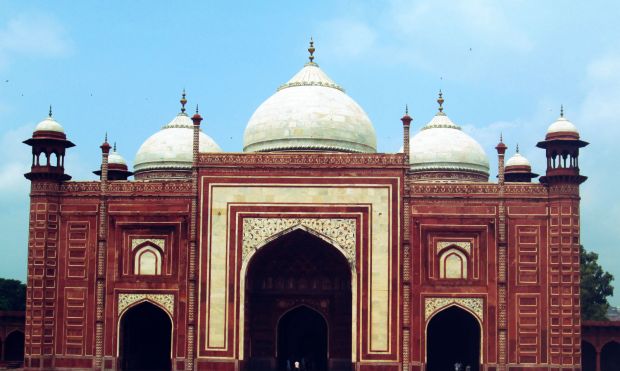 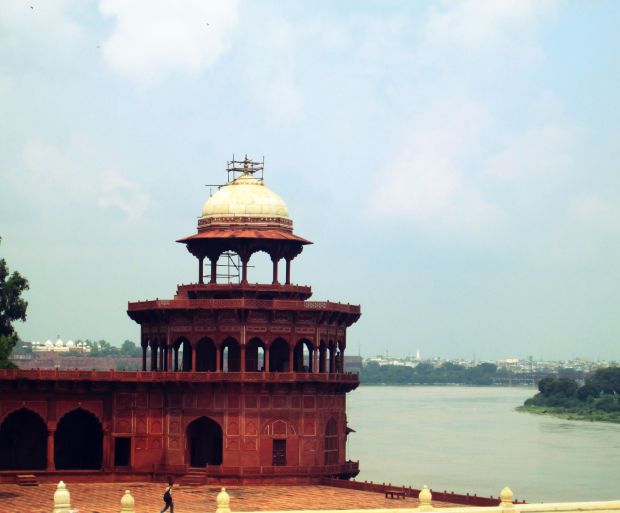 But this is not enough; every inch of this structure tells the story of eternal love and every corner shows the beauty which doesn’t only have the random doodling and designing but has a meaning. The Persian verses in calligraphy on the marble walls around the entry door with black marbles inlaid are taken from the holy book of Quran. 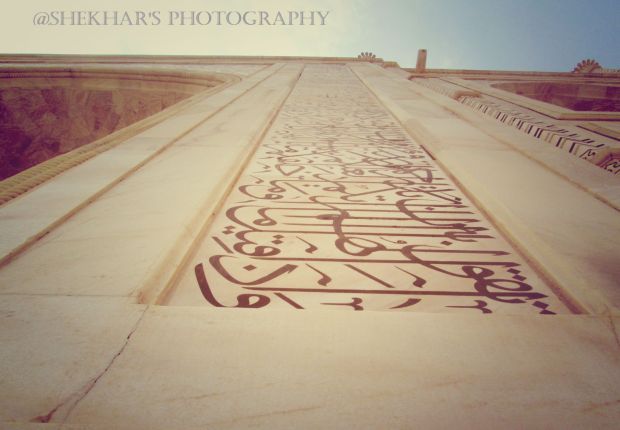 The design of marble jali lattice and reflective tiles in and around the sarcophagus is ethereal. 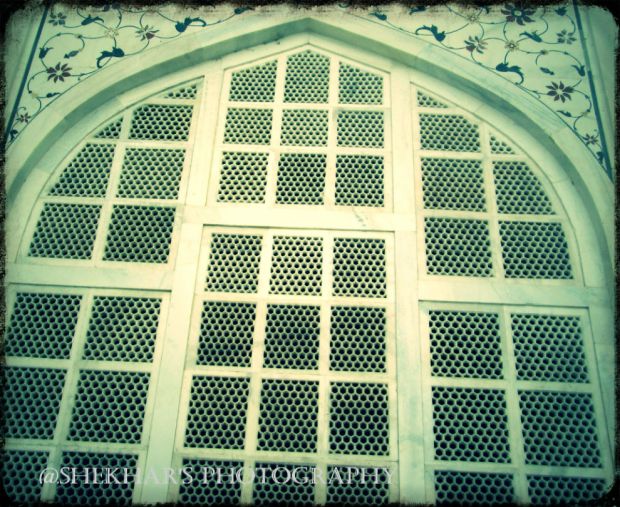 Plant motifs here caught my special attention. They are designed as if are unfurling or swinging with the blow of wind. Flowers carved in the marble makes it clear that Shah Jahan wanted to make Taj mahal a replica of paradise on earth. 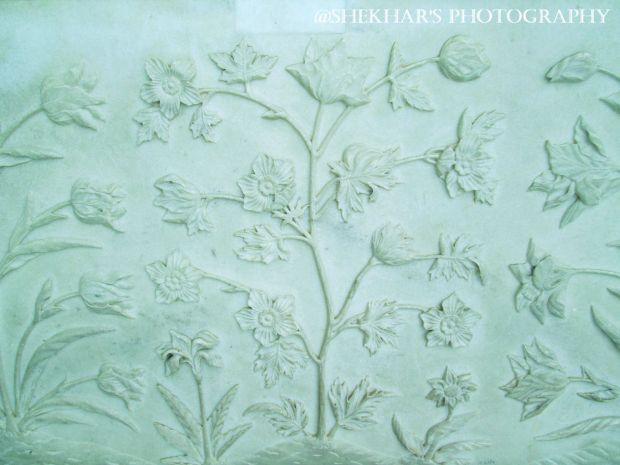 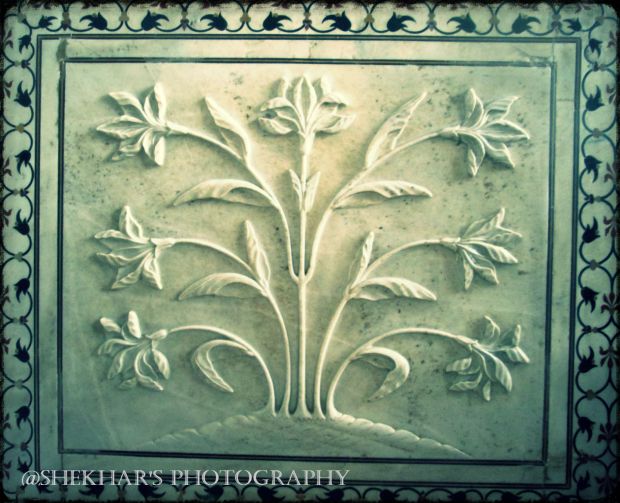 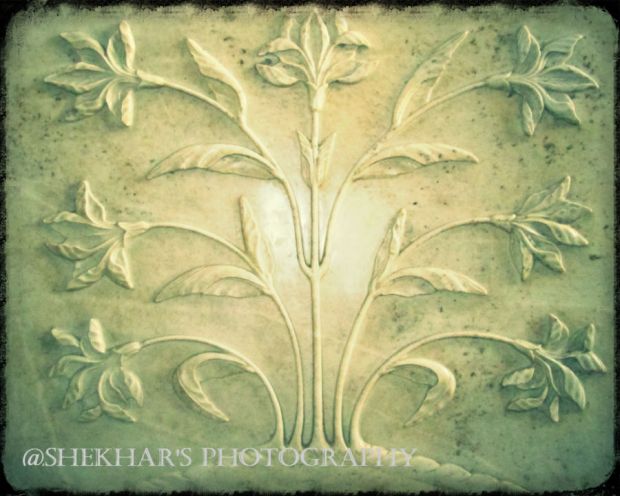 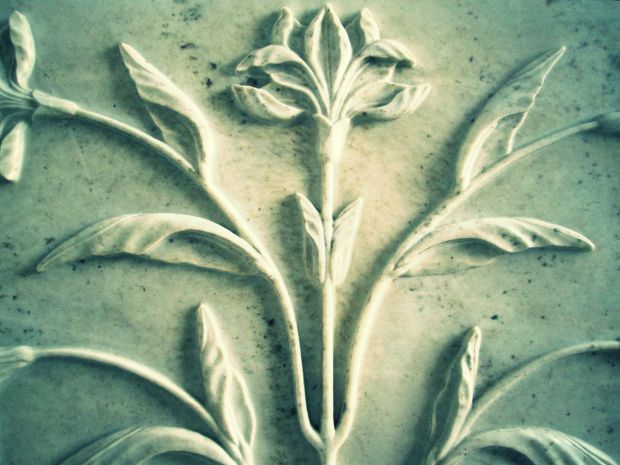 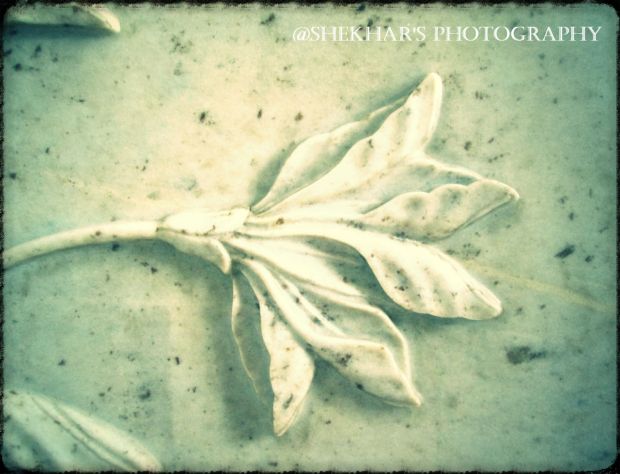 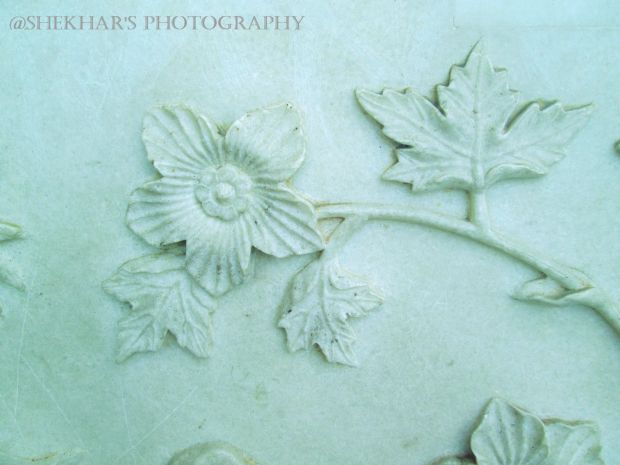 The intricate work is praiseworthy. The details of pietra dura jali inlay and intricate pierce work is spellbinding. 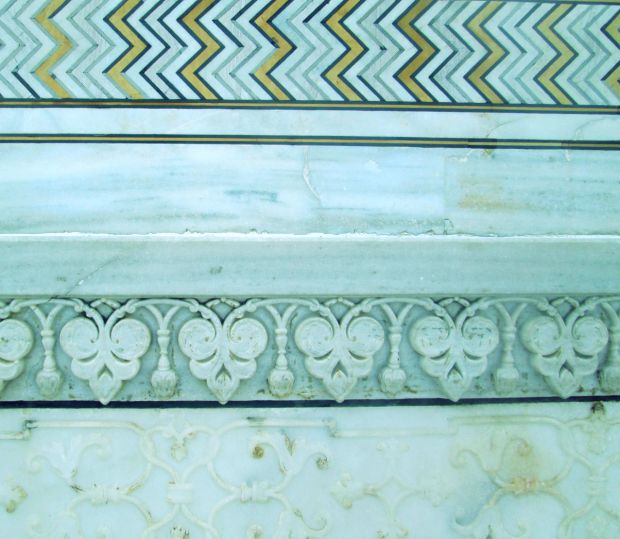 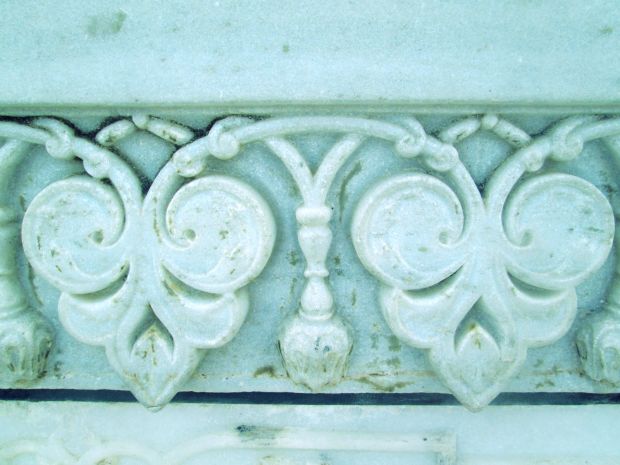 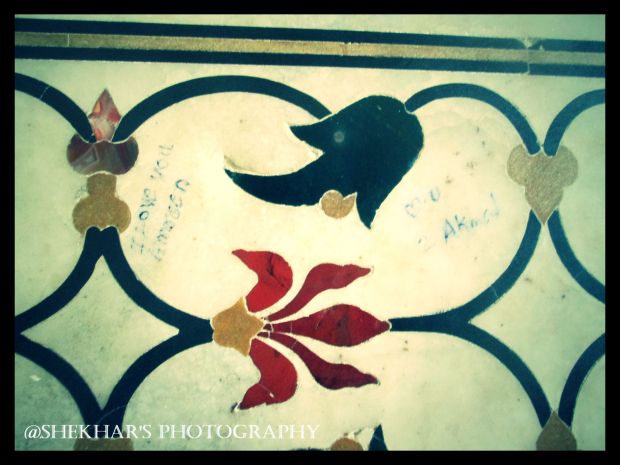 Filial on the top of the main dome also believed to be the tamga(stamp or seal) of the Mughal Empire which looks majestically grand and imperial in look must have made Taj look like a paradise in the sixteenth century with Koh-I-Noor atop of it. 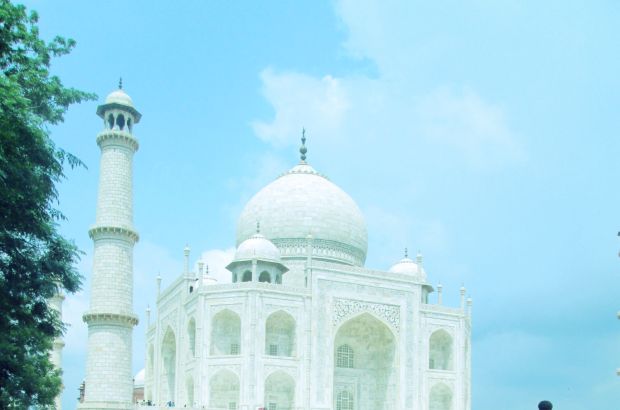 In short, from the filial at the top in the form of tamga to the stones on the floor, every nook and cranny of the Taj is remarkably beautiful. Taj is not just a paragon of love but it is the love personified itself in the form of this beautiful white tomb. It is an epitome of exceptionally astounding prowess of the architect and the workers involved in making it as well as of their aesthetic sense. 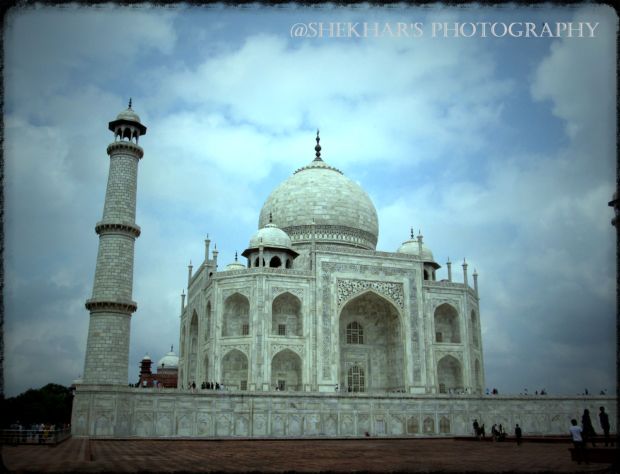 All that I can say after visiting the Taj Mahal is that the archetypal beauty of Taj does not only compel us to praise it because it has a tragic quintessential love saga being told to us since centuries but also the effort and efficiency of the workers who left no stone unturned to make this monument of love the way it is and did their utmost in all the ways possible to fulfill the megalomania of a Mughal emperor. It is not only a love story which has made Taj a monument of love but also the other way round; it is this structure which has made the love of an emperor eternal and immortal and THAT probably is the reason why Taj Mahal is and SHOULD be visited by one and all- to experience an ethereal love story, to feel that two lovers and not an emperor and an empress are resting in peace here, to know how vulnerable we all are in front of love and death, to see how love can probably look if manifested in a form, to see the grandeur of the Mughal architects and workers and of course…..to feel the love in the air here…so pack your bags and get ready…to live the experience yourself and to feel the love.

Pictures courtesy- All the pictures were clicked by me and some are originally posted on my Facebook page Shekhar’s photography-www.facebook.com/Shekharsphotography001/